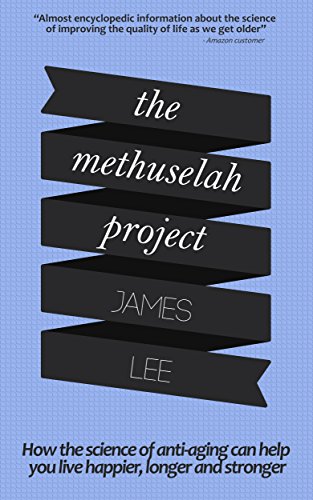 Since the first edition was first published in 2014, The Methuselah Project has quickly gained almost “cult” status among life extension fanatics, biohacking enthusiasts, as well as anyone else who is interested in their own health and longevity.

In what is by far his most comprehensive work to date, James Lee (author of “Better Living through Neurochemistry” and “The Biohacking Manifesto”) has painstakingly trawled through the latest research journals (and some older, more obscure studies) to identify the primary factors which underpin premature aging. He then uses this understanding to generate real-world applications which are aimed at extending the upper limit of your own lifespan.

For many people, the only time they are exposed to this topic is when they walk through the cosmetics section of a department store or supermarket, with “anti-aging” associated with wrinkles, age spots and other exterior signs of natural aging. However, this is a topic that has huge potential to benefit everyone, so it deserves a deeper investigation than the sales blurb for an anti-aging cream can give.

Lee takes you through the work currently being undertaken in university research laboratories and biotech companies across the globe, as scientists try to pin down exactly why and how we age, and most importantly, what we can do about it.

Many of these scientists and researchers believe that there is no “theoretical upper limit” to the human lifespan. For reasons which are slowly becoming clearer, humans appear to have a kind of “in-built, planned obsolescence” – not unlike your printer, which has been programmed self-destruct after a certain number of pages. Think about it for a moment – Why does a dog (which has a similar genetic makeup to humans) only live to around 15 years of age, whereas we humans can reach 80 or more? We used to think that lifespan was determined by the size of the animal, however if you line up a human, a dog and a cat, it doesn’t take long to notice the problems with this theory. Why are certain animals like crustaceans theoretically immortal?

Part 1 is focused on explaining the concepts that are central to the topic of aging such as – senescence, sirtuins, oxidative stress, the evolutionary theory of aging, mitochondrial dysfunction, inflammation, advanced glycation end products (AGEs) and telomere shortening.

Then, in Part 2, Lee shows how to apply what you learned in Part 1, including practical and common-sense suggestions on topics such as –

However, (with apologies to Bing Crosby), it’s not enough to just “accentuate the positive” – You need to also “eliminate the negative”, and in particular, address negative lifestyle habits or behaviors that reduce your chances of living a long life. In particular, Lee looks at how you absolutely must eliminate unnecessary risky behavior if you want to reach 100 and beyond.

No one single strategy will ensure you reach old age. Just as each risky behavior is cumulative, each positive act increases your likelihood of reaching whatever your age goal might be.

Do you want to harness the latest advances in science to build a blueprint for a long life?